After the recent refresh, it is expected that the current generation of Jeep’s compact SUV will remain in production for a few more years. Therefore, we believe that the next year’s model will come without more important changes. This refers to all models, including the 2023 Jeep Compass Trailhawk, which represents Jeep’s off-road take on this model, even though pretty much all versions of Compass are decent off-roaders.

This particular model stands out in many ways, mostly in terms of off-road features. Thank’s to the upgraded off-road suspension and upgraded AWD system, it is probably the best off-roader in the class of compact SUVs. Furthermore, it is also an attractive vehicle, with a nice interior and intuitive infotainment system. The list of standard equipment is pretty long as well. On the other hand, the key drawbacks are small cargo area and underwhelming engine power.

Since there are no significant changes to come, we presume that the 2023 Jeep Compass Trailhawk will hit the market sometime in the last quarter of the year. 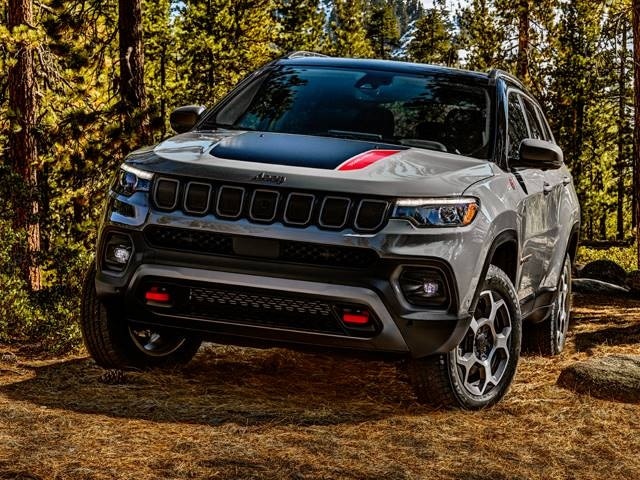 Considering that the 2023 Jeep Compass Trailhawk is coming just a year after the big update, it’s pretty much for sure that there will be no bigger changes. This version is the most capable off-roader in the lineup, so it’s no wonder that most of the exclusive features are in terms of off-road hardware. Of course, the first thing we should mention is the standard all-wheel drive. Furthermore, this model comes with suspension upgrades, which include a higher ground clearance as well. Among off-road upgrades, you can also find goodies like hill descent control, low-range gearing, Rock driving mode, skid plates etc.

This version also comes with a couple of exclusive styling details that accentuate its off-road nature. One of the first things you’ll notice is a lot of black plastics around the vehicle, while there are also unique 17-inch wheels that come with off-road tires, tow hooks and similar things.

The cabin of this trim level comes exclusively in a black color scheme. Also, there are a couple of exclusive features, such as ambient interior lighting. However, most of the interior look the same as the rest of the lineup. The refreshed interior looks really nice, with all those fine materials and new tech features. There’s no doubt that the cabin will remain fresh in the following years. 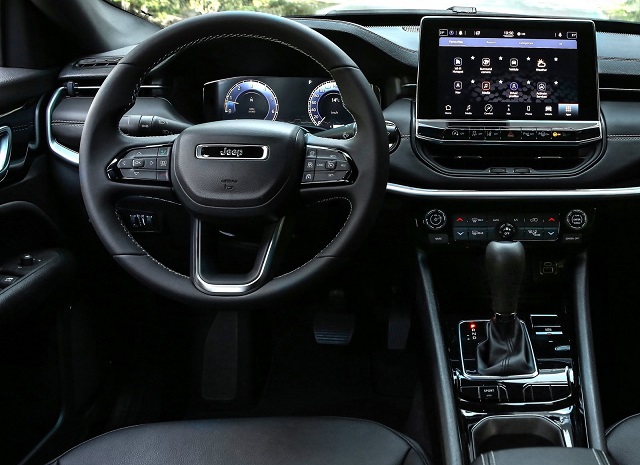 The same is with the overall cabin layout and interior space. There are two rows of seats and both are decently sized, with enough room to accommodate adults pretty easily. On the other hand, we can’t say the same for the cargo area, which seems small when compared to other models in the class, such as the RAV4 or the Forester. In numbers, you may count on no more than 27.2 cubic feet of room behind the back row, and 59.8 cubic feet of the total cargo volume.

Just like the current model, the 2023 Jeep Compass Trailhawk will continue with just one powertrain option on offer. That’s a pretty familiar 2.4-liter inline-four engine, which puts out around 177 horsepower. Considering that we are talking about a naturally-aspirated engine, it’s no wonder that it isn’t as capable as rivals with turbocharged engines. The performance feels a little bit underwhelming, while the 9-speed automatic transmission isn’t the most refined gearbox around.

On the other hand, you may count on standard all-wheel drive, as well as on all kinds of off-road goodies, such as different drive modes, two-speed transfer case etc. All these things make the Compass one of the best off-roaders in the class. 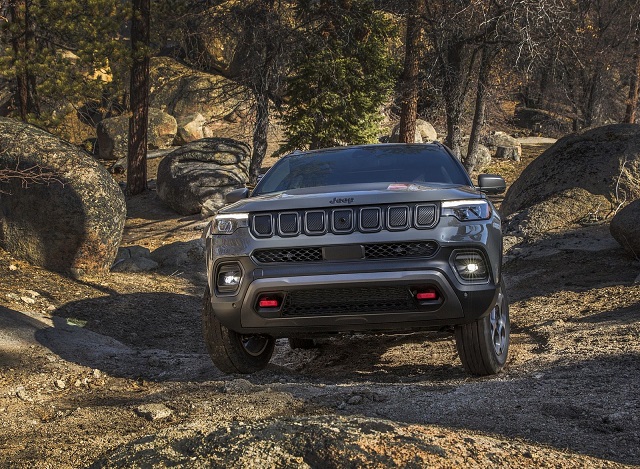 The standard Compass already features subpar fuel economy for the class, while this one is even thirstier. That’s no wonder, considering that we are talking about a model with standard all-wheel drive and raised ground clearance. As a result, the numbers are 21 mpg in the city and 30 mpg on the highway. That’s pretty low for a compact crossover.

We expect that the 2023 Jeep Compass Trailhawk will hit the market sometime late in the year, with a starting price of around 35.000 dollars.

Previous 2024 Cadillac XT4 Will Get Mid-Cycle Update
Next 2023 Subaru Outback Hybrid: What We Know So Far 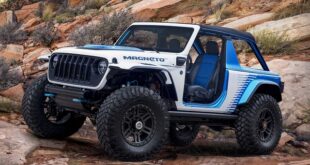 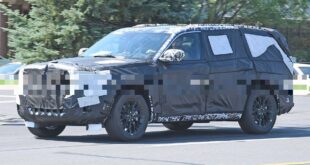 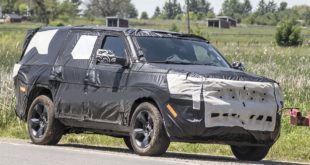 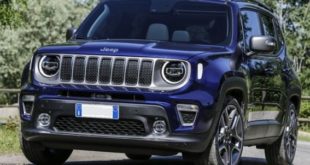 The upcoming 2021 Jeep Renegade will get small visual modifications next year. According to the …