The new version of 2021 Seat Ateca SUV has been revealed. From the latest news, this model will get a mid-life refresh, which includes updated looks, improved technology, and more efficient engines.

If you didn’t know, Seat Ateca is a Spanish brand’s first-ever SUV made. It was launched in late 2016 and it went straight to the top of its class. After a few years of great success in sales, the new model is ready to conquer the crossover market again with a refreshed look.

The new 2021 Seat Ateca crossover offers a great design that looks attractive. Firstly, the manufacturer added a unique pattern on the grille and redesigned bumper with fog lights. The new grille somehow reminds us of the Leon hatchback. It’s attractive and looks like a hexagon.

However, as before the almost same headlights shape remains. On the back, the upcoming 2021 Seat Ateca features taillights that will use the latest LED and two exhaust systems placed in the bumper.

The previous Ateca already offers a great and modern cabin. However, according to the manufacturer, the cabin of the new model will be more driver-orientated. Buyers can expect an eight-way electric driver’s seat adjustment and a memory function as standard. Besides, other interior changes include a more shapely steering wheel, better seat materials, and matte surrounds over the dashboard, center console, and air vents.

Ateca’s infotainment systems will better as well. As we heard, the Entry-level SE will sport advanced 8.25 in touchscreen. More options will be on the upper trims. For example, buyers can get a more significant 9.2 in a screen that includes a voice control system with natural speech recognition. Meanwhile, higher-spec FR Sport and Xperience Lux models are the most equipped. Both ones will come with a new 10.25 in the customizable digital instrument display.

2021 Seat Ateca Under the Hood

Tweaks have been made and the upcoming 2021 Seat Ateca will come with some mechanical changes. This model offers a few engine options. According to the manufacturer, the base Ateca will use the same three-cylinder 1.0-liter turbocharged petrol engine, however, as we heard that this engine would result in an improvement of up to 10% in fuel economy.

Meanwhile, the optional 1.5-liter turbocharged petrol four cylinders are still on the offer, and it will reduce fuel consumption like the base one. As for the diesel engines, the 1.6 TDI has been replaced with the new 2.0-liter that produces 115 horses. Lastly, if one needs more power, there is a 2.0-liter TDI that pumps out little less than 200 horses. We are still waiting for information about the exact fuel consumption and transmissions.

The manufacturer releases a new set of images. From them, we can see that 2021 Seat Ateca will look stylish and it will bring noticeable updates. However, the Seat manufacturer didn’t release any official info regarding the release date and price. From many reports, this SUV might be available later this year. 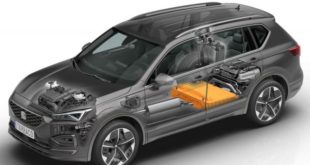